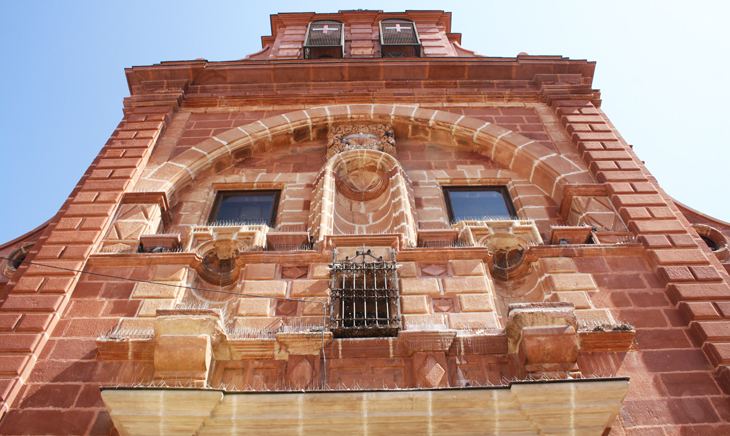 The Trinitarian Order originated from the Christian movements in the Holy Land, when St. John of Matha founded the Order in 1198. As early as 1633, the Trinitarian monks had already moved to Alcázar de San Juan and preached in its streets, which brought them benefactors such as two members of the Inquisition: Juan Guerrero Portanova and Bernarda de Úbeda, the main promoters of the future Trinitarian convent and church.

This was carried out despite the strong opposition of the Franciscan monks, who since the construction of the convent of San Francisco had become very important in the town, as well as that of the Mayordomo of the Order of St. John in Alcázar.

In 1647 Juan Guerrero and his wife signed the deeds for the convent’s construction, where imposed their conditions. They ensured their recognition as patrons, which would be highlighted by the decoration of the walls of the church and the convent with their noble coat of arms.

It suffered the action of the Spanish confiscation of Mendizábal in 1834, when the thirty Discalced Trinitarians who lived in the convent had to leave the place. From that date onwards, the monks’ cells have been inhabited by low-income families. Thanks to this event, the convent was preserved and not destroyed, a fate that befell the Franciscan convent in the same locality after it was abandoned. The church also suffered from Spanish confiscation, and worship was not restored until 1844. Until 1879 the Trinitarian church became part of the parish of Santa Quiteria. After the return of the Trinitarians to the convent in the same year, the families living in the cells were evicted.

It is a Baroque church with three naves, with the central one larger than the side naves. It has two doors. The smaller side door holds the coat of arms of the Trinitarian Order, with the red and blue cross inserted in a lobed structure, adorned with a crown and vegetal reliefs.

The main entrance is a curtain façade, or altarpiece-front, which is very common in Spanish Baroque architecture. It was restored in 1750 and built in the characteristic reddish stone so common in Alcázar de San Juan, visible on the noblest sides such as the corners, plinths and doorways. The rest of the façade was constructed in masonry. Decorative elements and ornamentation cover almost the entire façade. The main façade also acts as a bell tower, giving it a triangular appearance and emphasising its verticality, highlighted by the two giant Tuscan pilasters on both sides of the entrance. On the left side is a mechanical watch sphere. The entrance is protected by a semicircular arch supported by pilasters and decorated with cushioning. On the second level of the façade, we find the end of the building’s construction date: 1725.

It originally had a bell tower. This construction, however, was lost in 1834 as it had been built on a slope. Nowadays, the bells are located in a large belfry in the upper part of the façade, both belonging to the Casa Mutua de Vitoria, and brought to the town in 1954.

The three naves are connected using the arcade that runs through the building in the interior. The side naves are connected to chapels, which are also connected to each nave by semicircular arches. The transept is covered by a dome supported by pendentives with large medallions depicting Saint Michael of the Saints, Saint Thomas of the Virgin, Saint John the Baptist of the Conception and Sister Marcela.

At the head of the church, above the crypt, we find the main altar, in which the altarpiece with an ambulatory chamber that contains the image of Jesús Nazareno stands out.

What to see in Alcazar de San Juan

Church and Convent of San Francisco